… and now for the bad news. They are coming to Long Beach. 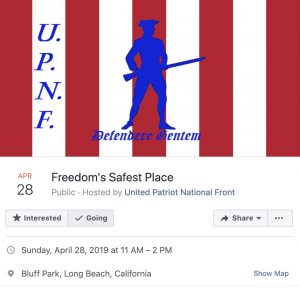 On Sunday, April 28, 2019, Drake Nighswonger, self-avowed fascist and white nationalist extremist will be bringing his group, United Patriot National Front, to Bluff Park. They are bringing their hate speech and violence under the false pretense of “freedom” and “free speech” to coerce the diverse, progressive residents of Long Beach into believing they care about free speech.

Instead, what we can expect is a violent group of white supremacists descending on Bluff Park with the full intention of instigating trouble. At past events (mentioned above), they arrived in full body armor and armed with weapons.

In the image below, Drake announces to his followers that he is coming to Bluff Park with clear intentions of some sort of a face off. We hope his intensions are not violent. 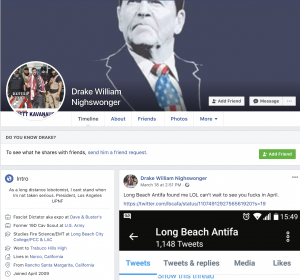 Drake, now aware of the community alert, with his clear intension of provoking a violent confrontation in our community.

Drake is not a resident of our community. Various sources have his home address listed in Norco, CA. 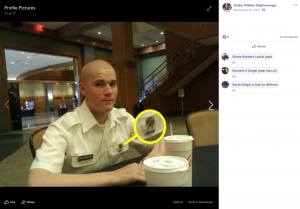 Drake wearing some sort of uniform with an iron cross on shirt pocket.

We can also expect another violent white nationalist, Antonio Foreman, known for having participated in the deadly Unite the Right rally in Charlottesville, VA, in August of 2017. Additionally, other violent white nationalist groups such as Hammerskins, Proud Boys, and American Identity Movement (previously known as Identity Evropa), are expected.

Please come to Bluff Park on April 28th, at 10am to show our community’s disdain for white nationalism and white supremacism. Help defend Long Beach from those who want to bring their hate and bigotry to our culturally diverse community. 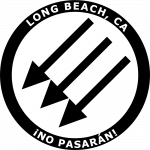