We’d like everyone to meet Roger Rowe (current alias “Velton Vindex”), born March 7, 1994, former US Army Ordinance officer and suspected Atomwaffen Division member based in Orange County, Southern California. We feel that you, residents of Southern California communities, should know more about Roger Rowe and the danger he poses to the greater Long Beach and Orange County communities, in order to unite against the growing threat of white nationalism and white supremacy. 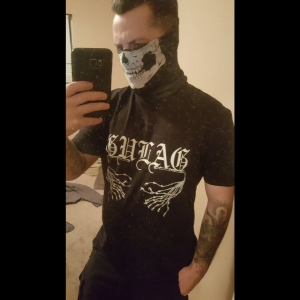 Rowe can be seen here in the skull style mask popular with violent neo-Nazi groups. 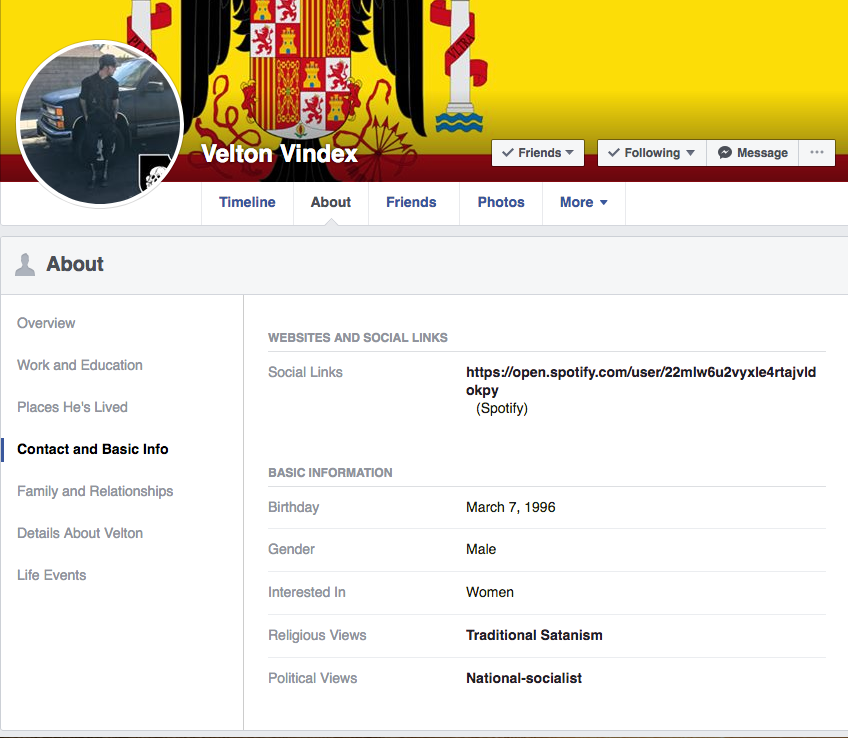 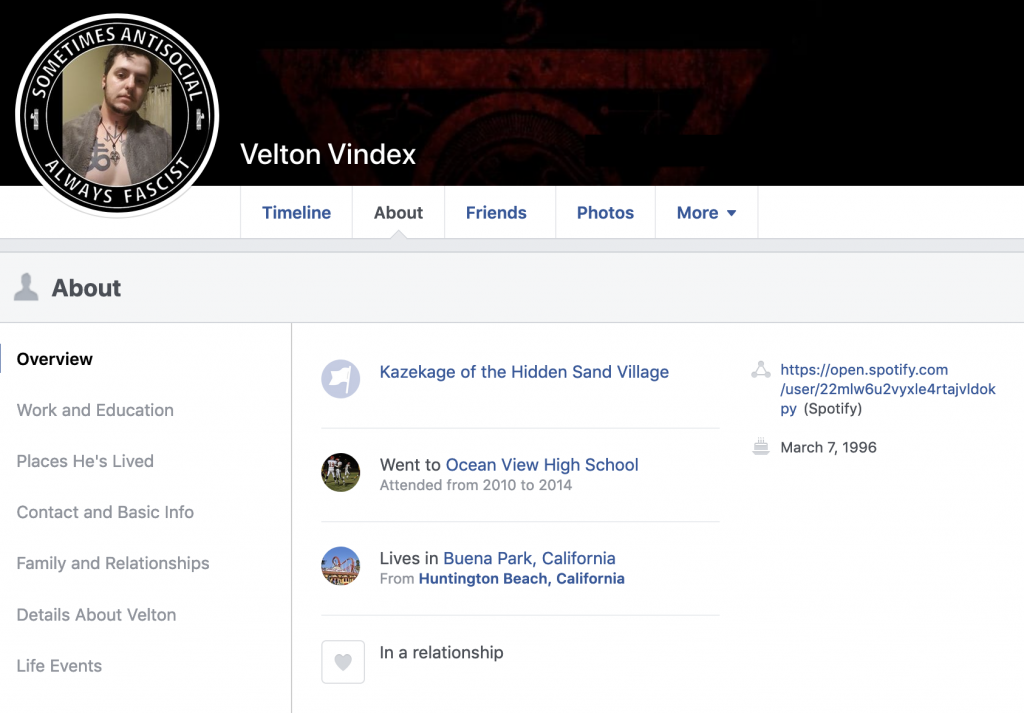 Rowe’s About Me page on his Facebook reveals some of his personal details. 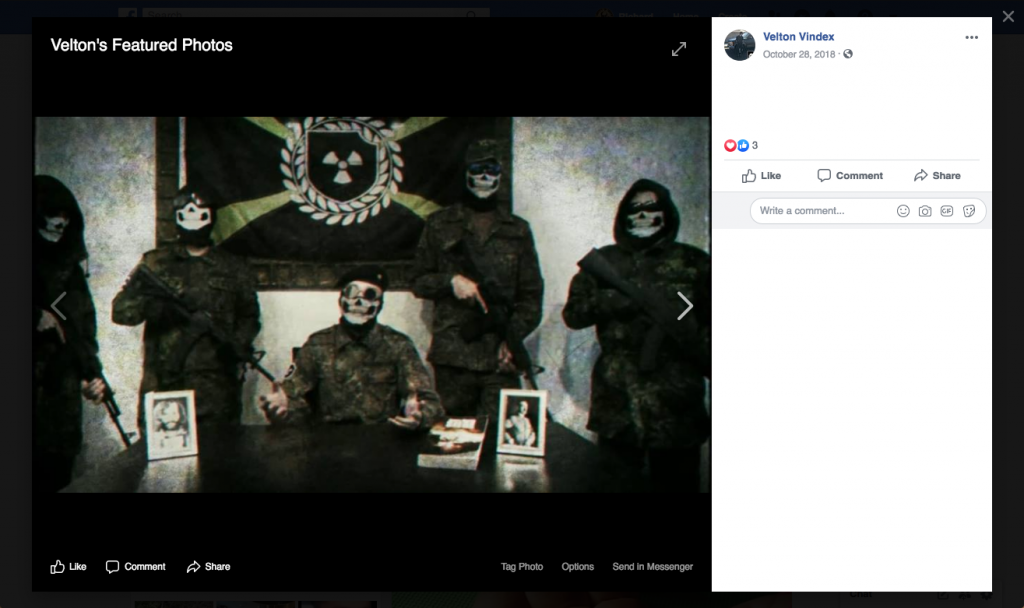 Atomwaffen Division, like many neo-Nazi and fascist groups, has been known to recruit active and former members of the US military.This issue, which the US military apparatus has failed for decades to address, gives violent neo-Nazis and fascist individuals and groups access to military-grade weapons. 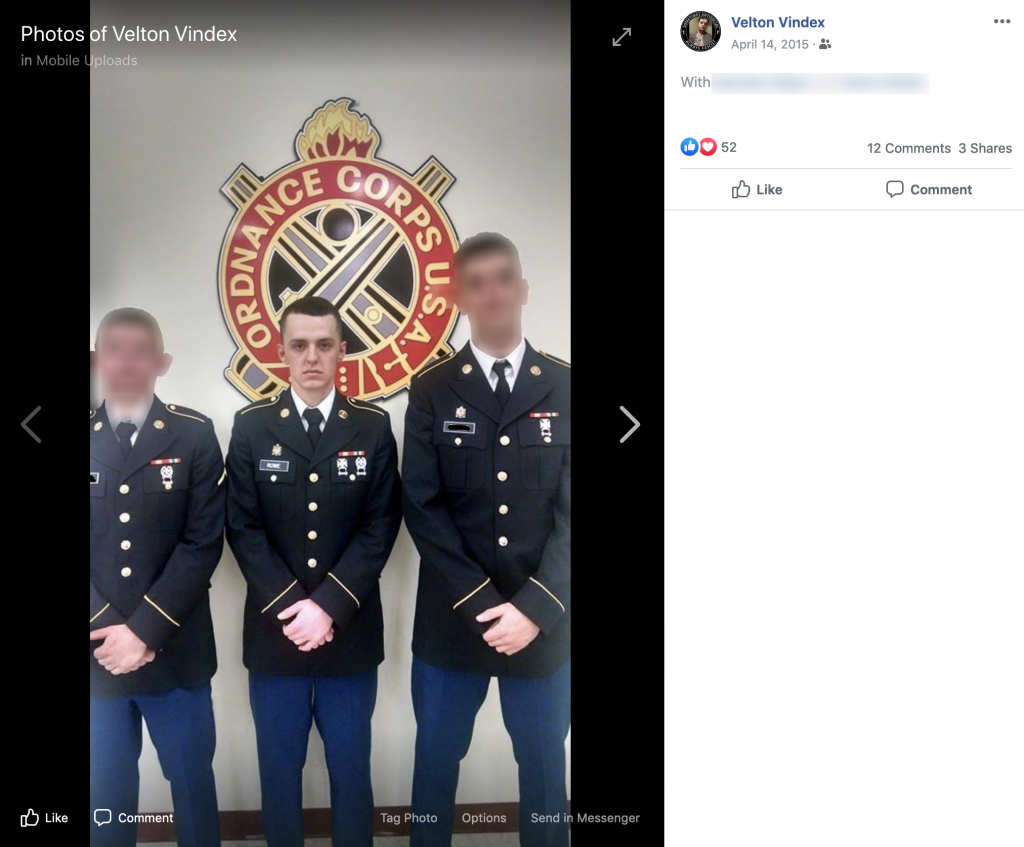 Rowe uploaded pictures in military uniform in front of an emblem reading “Ordinance Corps U.S.A.” in 2015 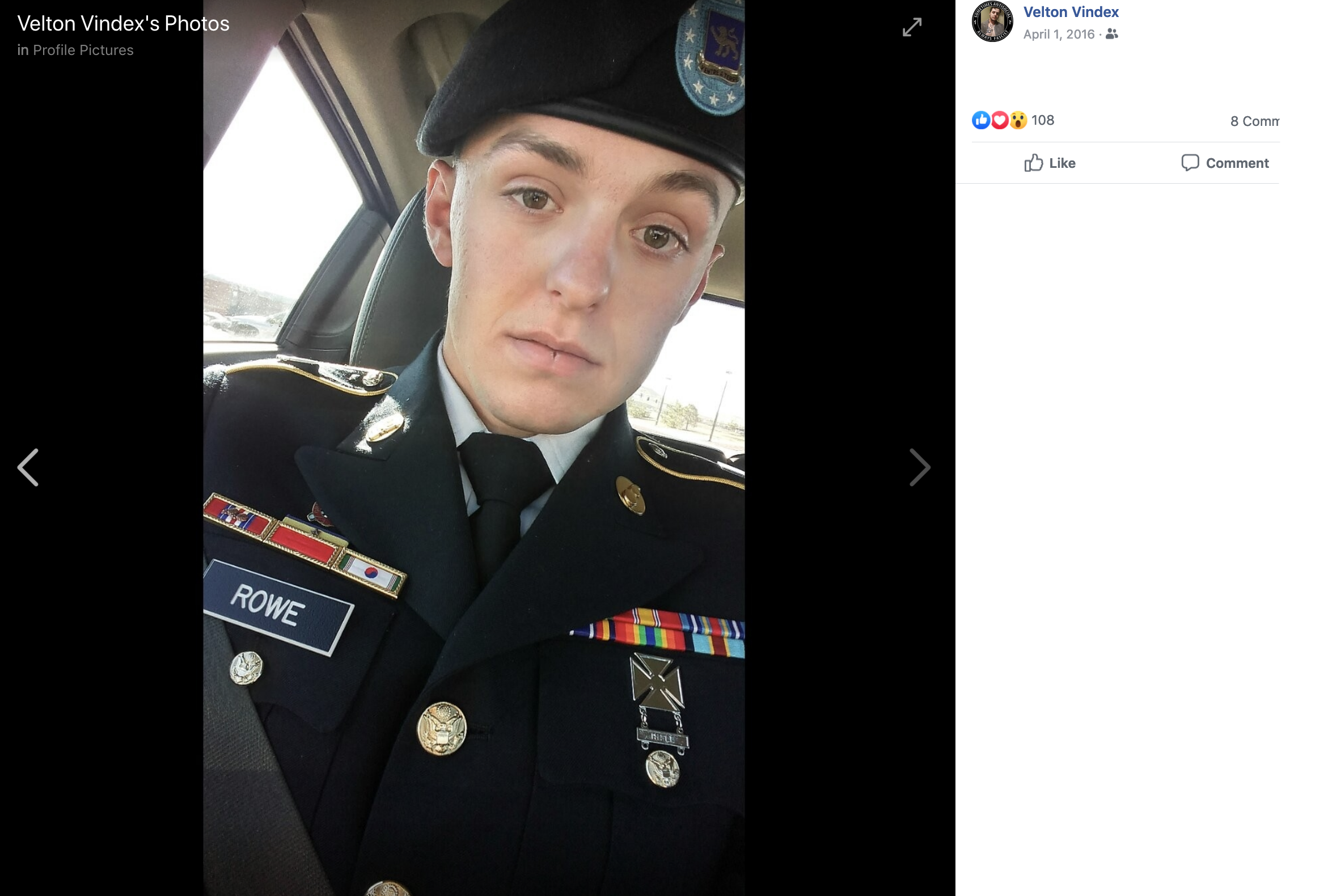 Several Atomwaffen Division members have been incarcerated for murder and other violent hate crimes, usually also having possessed significant stores of weapons. 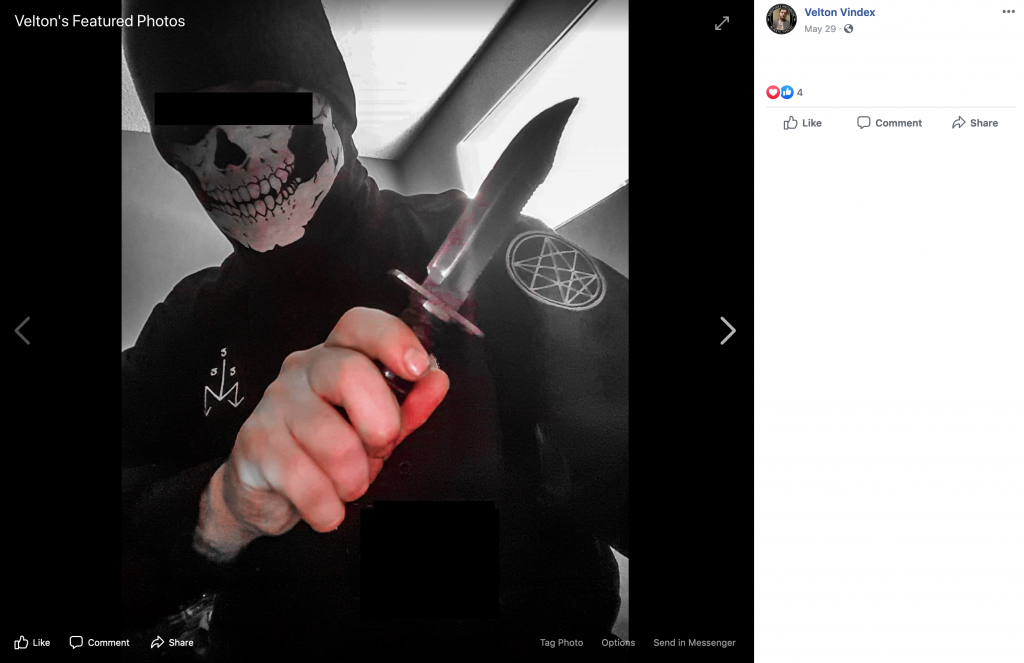 A recently uploaded picture to Rowe’s Facebook depicts an individual with eyes blurred out and face obscured by a skull mask holding a knife threateningly. 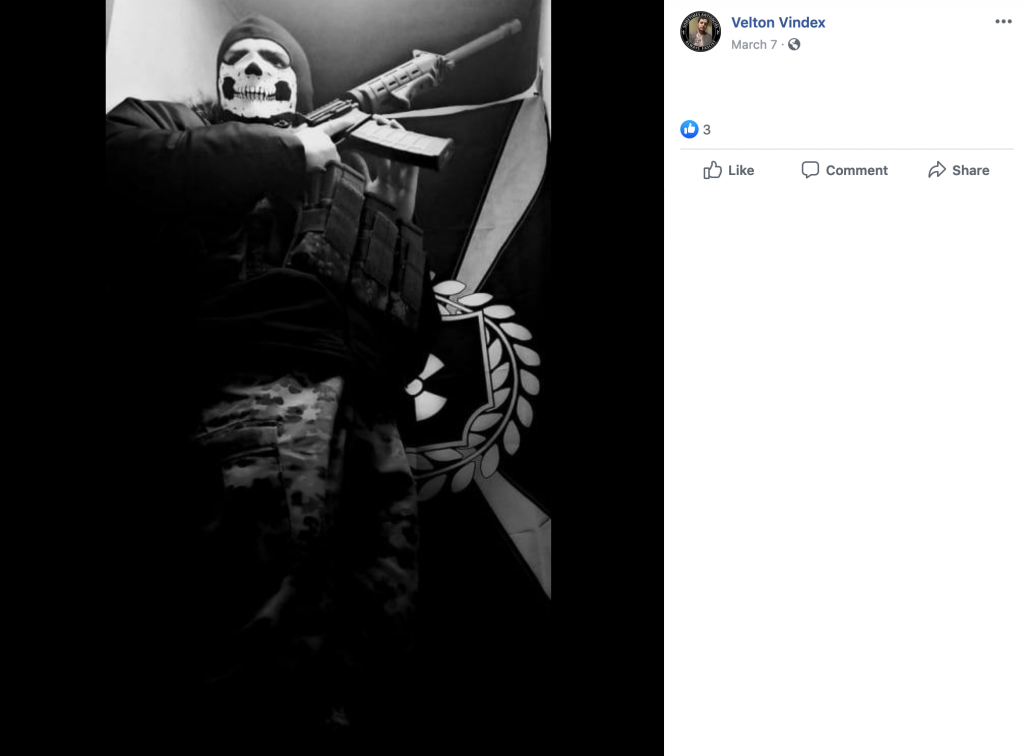 A recently uploaded picture to Rowe’s Facebook depicts an individual with face obscured by a skull mask holding an assault rifle threateningly. Note the Atomwaffen Division imagery in the background.

Additionally, Rowe’s tattoos (symbols which also appear on his clothing in this picture), as well as his chosen alias of “Velton Vindex”, is evidence that he is a follower of “The Order of Nine Angles“, a Satanist and occultist view that many AWD members are known to follow and which idolizes neo-Nazism and Adolf Hitler. As previously mentioned, his Facebook personal details list his religion as Traditional Satanism. 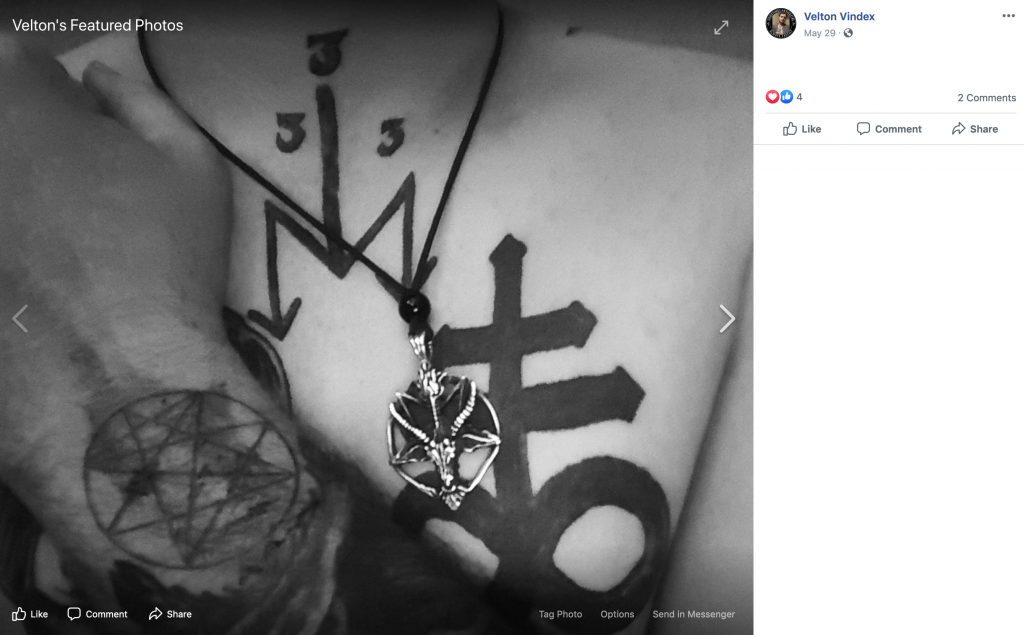 Rowe’s tattoos shown here on his neck and wrist, as well as his necklace, depict typical Order of Nine Angles and Satanist imagery.

It appears to us that Rowe has taken efforts to conceal his personal details online, likely due to criminal prosecution of other AWD members. However, his full name was revealed through his vanity URL on his Facebook page, and details listed on his about page match up with other public records linking him to Huntington Beach, CA, Buena Park, CA, Garden Grove, CA, and Colorado Springs, CO.

Although Rowe uses an alias on his Facebook, his vanity URL for his profile lists his real name. 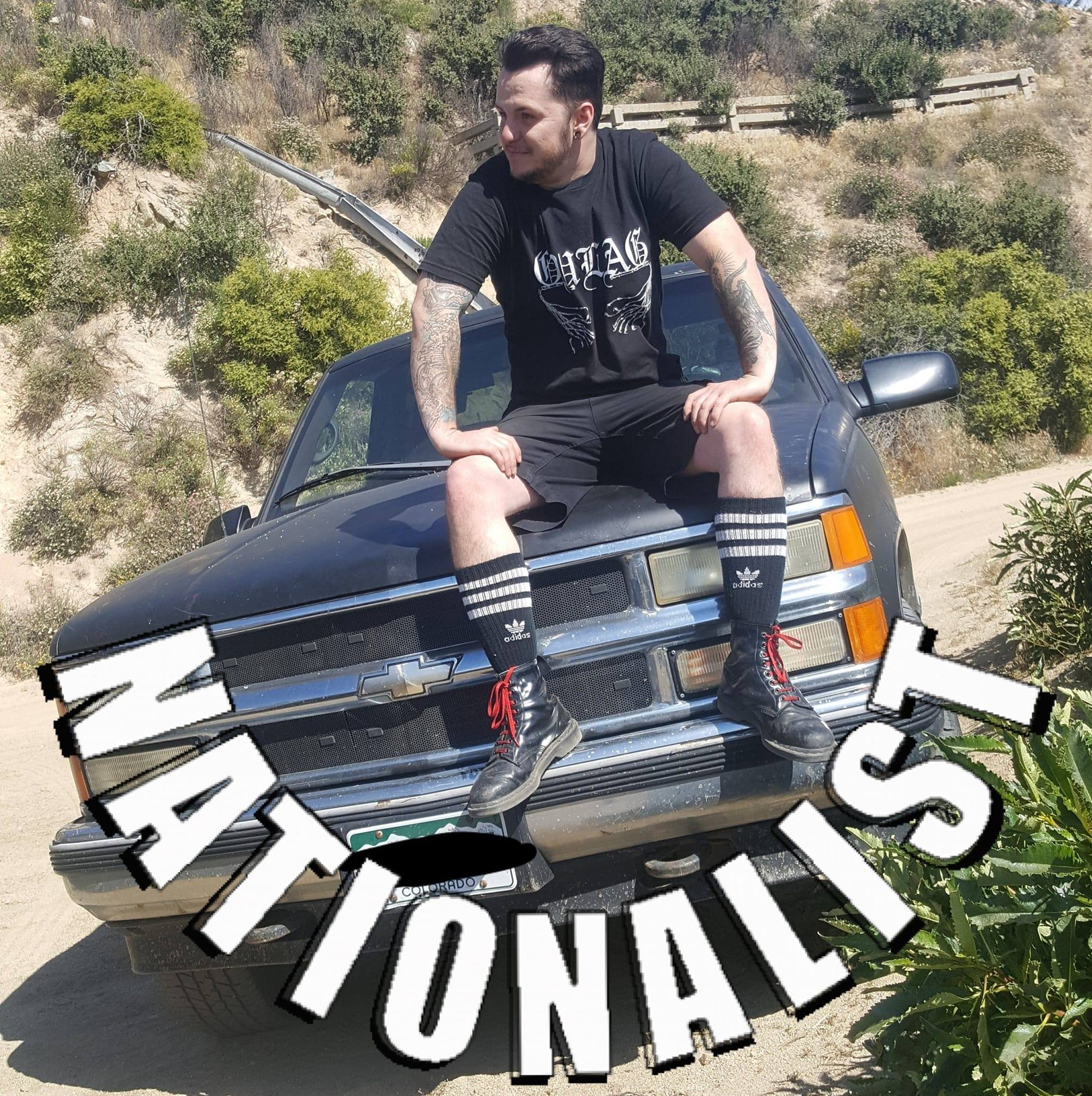 Rowe is seen here sitting atop a Ford truck with Colorado plates.

We feel it is important that the world know who Roger really is, particularly given the access to military-grade weapons that would have been provided to him in his position as an ordinance officer with the US Army.

Additionally, the presence of Colorado license plates as well as other images uploaded to his Facebook seem to place him in the Colorado area, which has served as a known hub for Atomwaffen Division members (including murderer Samuel Woodward) to meet up with neo-Nazi figurehead James Mason. 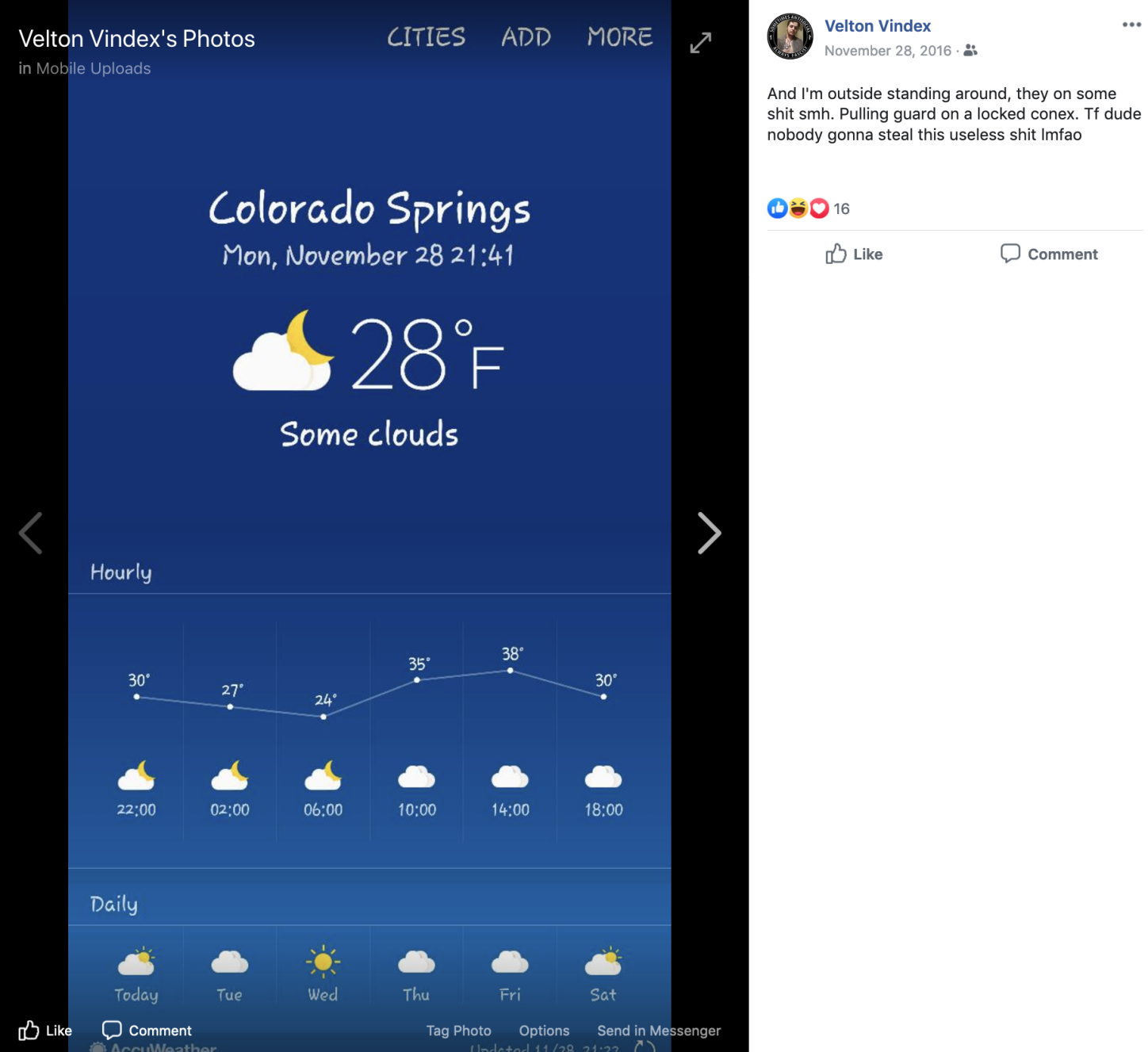 Although we have been unable to verify Rowe’s current location or employment, we believe it is vital that the information we do know is made available to the public.

Roger is pictured here in his latest profile picture describing himself as a fascist (the symbols on the sides are fasces, traditional fascist imagery). 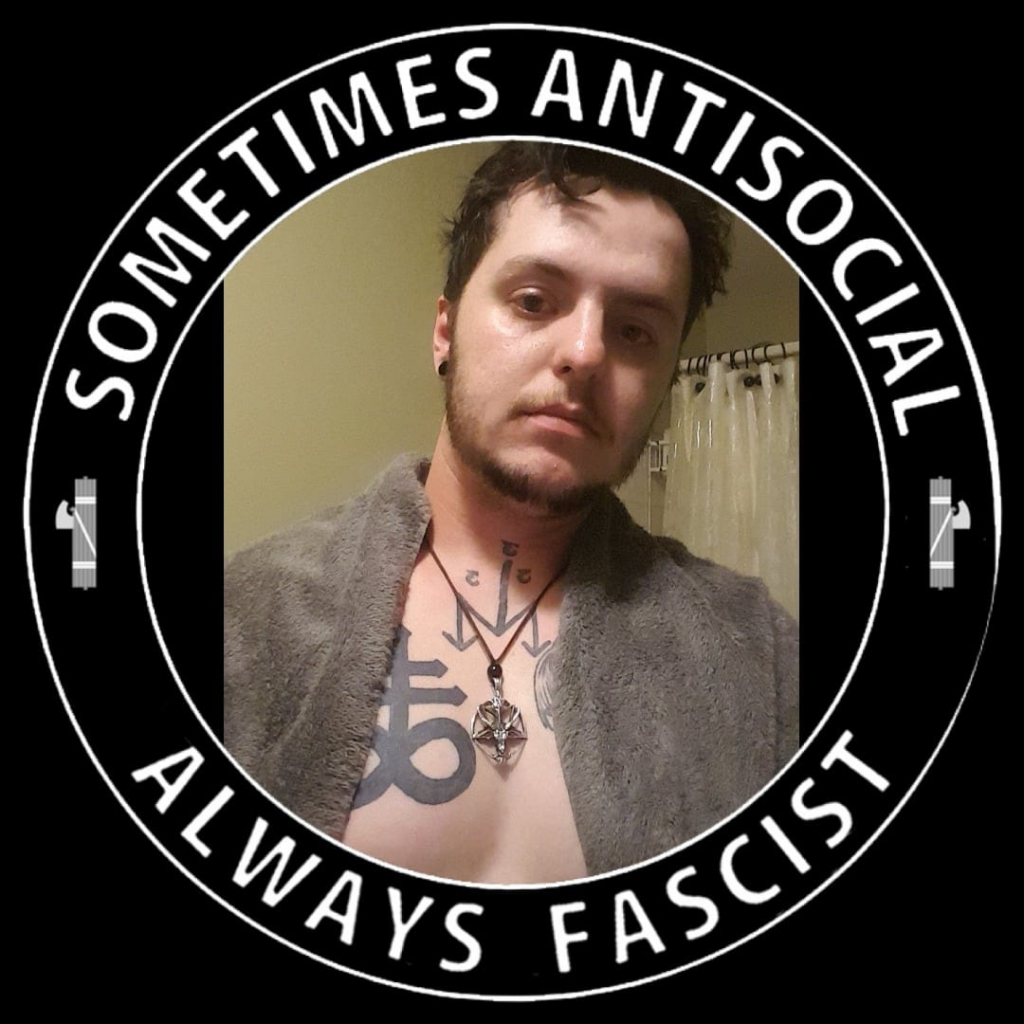 This parody of the antifascist slogan “Always Antifascist” along with the fasces displayed illustrate Rowe’s commitment to fascist ideology.

Make no mistake, fascists like Roger are indeed the real fascists. They are armed, ready for a “holy race war,” dangerous, and have an agenda and history of hate and destruction.

If you have information about Roger Rowe, please email us: